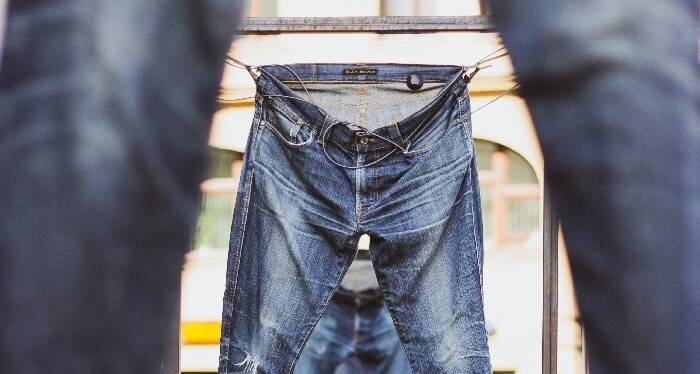 America is birthplace to baseball, corn dogs, and George Washington. But did you know that jeans were first made in the good old USA, as well? Yes, this cherished staple was invented in the 1800s, and its popularity continues. Let’s take a look at the history of this wardrobe must-have.

Who can imagine a closet without their favorite pair of jeans? Not Americans! In fact, the average American woman owns seven pairs. And that teenager that you know? Let’s just say they possess a lot more! Although jeans were first made in the USA, most are now produced in other countries and imported to America.

Our love affair with jeans began in the 1870s with a man named Levi Strauss. His name is familiar to most as the inventor of the first pair. But that isn’t exactly what happened. Levi, an immigrant from Germany, owned a shop that sold many items, including cloth. Although he began business in New York, he soon moved to San Francisco to follow the prospectors searching for their fortune. The Gold Rush was in full swing and California was a bustling region.

His shop caught the attention of a tailor named Jacob W. Davis. Jacob frequently purchased cloth from the Strauss store to create desirable items such as tents and carriage covers. Newcomers flooded the area, so this was a profitable trade for both men. Soon, Davis and Strauss discovered a real gold mine.

Denim was a tough fabric created in France as an attempt to copy a similar material made in Genoa, Italy. Yes, Genoa sounds like jeans! Although the French didn’t succeed, they actually invented something that became more lucrative and beloved. This French fabric, from Nimes, would soon be labeled denim. As in “de Nimes” or of Nimes. Isn’t language amazing? Now, back to Levi. He brought many products to America from Europe, including denim. Thank you, Levi!

One customer requested Jacob to make a hefty pair of pants that would withstand the elements and long work days. Davis came up with a clever design that combined denim with copper rivets. These simple pieces of hardware held the pants together in an innovative way. So, give credit where credit is due! Jacob imagined and crafted the first pair of jeans in the USA.

The two men joined forces and began jean mania. The pants were perfect for outside use and hard labor. As the years went on, they took on a different twist. Our brave military troops brought the allure of jeans overseas in the 1940s. As citizens watched off-duty Americans wear their jeans around town, the trend grew. More and more people wanted, no, needed to have their own pairs. When handsome stars such as James Dean sauntered on screen in denim, a whiff of sexiness appeared. This trend exploded with the marketing success of risqué ad campaigns in the later part of the 20th century. Everyone wanted jeans!

But this once uniquely American product began being produced elsewhere. Why? This happened for many reasons, but the biggest reason was cost. Companies find it cheaper to mass produce clothing in other countries.  97% of all apparel comes from overseas, including China and Mexico, due to economics.

You can find jeans in black, white, stripes, or floral prints. Some have hems that drag on the ground while others will never see your ankles. Still other versions of denim show off more than your grandmother would imagine. You buy ripped jeans, skinny jeans, boyfriend cut, bootcut. But can you find jeans that are made in the USA?

Jeans make you feel comfortable, stylish, and trendy. They can also make you feel guilty. Take a look inside your favorite skinnies. Where were they made? If they are a pair of Buck Mason’s or Raleigh Denim pants, then breathe a sigh of relief. Your jeans were handcrafted in the USA. These are just two of the companies, from housewares to pet food, fighting exorbitant costs to remain in the USA.

You will be buying more jeans very soon because, well, they are jeans. When you do, consider a pair made right here in America. And don’t forget. We wouldn’t look nearly so fabulous if it wasn’t for Jacob W. Davis.